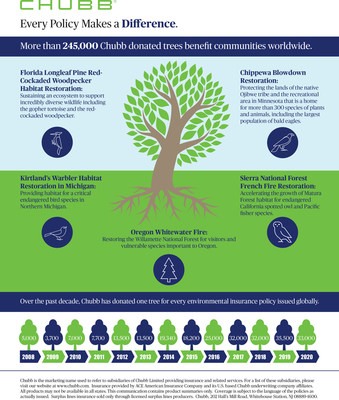 WHITEHOUSE STATION, N.J., April 20, 2020 /PRNewswire/ -- In honor of Earth Day, Chubb announced its pledge to sponsor the planting of 33,000 trees in 2020 as part of the American Forests American ReLeaf Program. Chubb began supporting the cause in 2008, and this pledge represents one tree for each new environmental insurance policy written globally throughout 2019.

"Chubb is proud to support the American Forests American ReLeaf Program and further align with their mission to protect and restore threatened forest ecosystems," said Craig Richardson, Executive Vice President, Chubb Environmental. "Since 2008, Chubb has pledged to plant one tree for every environmental policy written, and in 13 years we have planted more than 200,000 trees through American Forests."

In addition to this donation, Chubb, its employees and its charitable foundation continue to demonstrate their support for a wide range of environmental philanthropies and volunteer activities in local communities around the world. Chubb's charitable foundation grants have also helped preserve sensitive lands and habitats, finance green business entrepreneurs, and support educational programs that promote a healthy and sustainable environment, both domestically and globally.

In addition, Chubb is committed to measuring and reducing greenhouse gas emissions from its own operations. From 2015 to 2018, Chubb and its predecessor companies reduced their absolute global Greenhouse Gas (GHG) emissions by 21%. From 2016 to 2019, Chubb reduced its absolute GHG emissions by 22%. By 2035, the impact of the company's continued focus on achieving its emissions targets will result in the emissions reduction of nearly 45,000 metric tons of CO₂ equivalent per year.

Chubb's contribution will support the following planting projects with American Forests in 2020:

Kirtland's Warbler Habitat Restoration in Michigan: When human settlement and commercial timber harvest in the 1970s and 1980s altered natural forest cycles in northern Michigan, home to the endangered Kirtland's warbler, the bird's numbers plummeted. Conservation efforts over several decades have expanded the warbler's population from approximately 400 to more than 4,000 birds. Conservation success stories take a very long time to develop so this rare and exciting population rebound is exciting and something travelers should be very proud of helping make possible. Thanks to supporters like Chubb, a species was brought back from the brink of extinction and conversations have started around delisting it.

Florida Longleaf Pine Red-Cockaded Woodpecker Habitat Restoration: The longleaf pine ecosystem is an incredibly diverse supporter of wildlife, featuring hundreds of unique plant and animal species. The gopher tortoise on its own provides habitat for more than 360 species by digging tunnels in the sandy loam distinctive to these forests. It and the red-cockaded woodpecker are two landmark species central to recovery efforts. The longleaf pine habitat that is crucial to the survival of the tortoise and the woodpecker once spanned across more than 90 million acres. Extensive logging and the abandonment of Native American wildfire management practices began to diminish longleaf pine forests. Today less than five percent of that ecosystem still exists and, as a result, many wildlife species are in danger of extinction. Reforestation is critical to the survival of the longleaf pine forests and the species that call it home.

Sierra National Forest French Fire Restoration: After several years of sustained drought, Sierra National Forest was incredibly dry. An abandoned camp fire escaped and ultimately burned over 14,000 acres. It cost $12 million to suppress. This was called the French Fire. Trees have failed to regenerate in many of the most severely burned areas. The forest needs our help to come back. These areas are home to both the California Spotted Owl and Pacific Fisher, both threatened/endangered species. This project will accelerate the growth of mature forest habitat for these species and many others. It will also restore scenery along the Sierra Vista Scenic Byway.

Oregon Whitewater Fire: The Whitewater Fire devastated Willamette National Forest in Oregon in 2017, burning more than 11,000 acres and causing severe damage to the ecosystem. The area is near the North Santiam Watershed located along the north east boundary of the adjacent to the Northern Willamette Valley, home to approximately 750,000 people. This is a highly productive watershed that is important for people and natural resources. The area provides an abundance of recreation opportunities concentrated along the North Santiam River including hiking trails, camping facilities, and swimming opportunities.  The watershed also provides habitat for a wide range of species including the endangered Spring Chinook Salmon and Northern Spotted Owl. For these reasons, support is critically needed to start the restoration process. Chubb is helping plant a variety of Douglas-fir, Noble fir, White Pine, Western Hemlock and Red Cedar trees which will help bring this critical area back to life.

Chippewa Blowdown Restoration: Chippewa National Forest is a shared home to many diverse inhabitants. The protected lands of the native Ojibwe tribe and the juxtaposed recreational areas share more than 300 species of plants and animals, including the largest breeding population of bald eagles. The forest is now under threat from a number of different sources. Insects and disease are ravaging conifer thickets, climate change is affecting the resilience of old-growth stands, and increasingly powerful storms are levelling entire groves. The good news is that the soil is fertile and the native tree species are easily cultivated and the impact of this project will extend far beyond Chippewa. Not only will the forests work to purify the lakes and streams nearby, which include the headwaters of the Mississippi River, they will also be hard at work purifying the atmosphere.

Founded in 1875, American Forests protects and restores urban and rural forests and is the oldest national nonprofit conservation organization in the country, serving as a catalyst for many of the most important milestones in the conservation movement. American Forests has planted hundreds of millions of trees over the last century, and 60 million in the last 30 years alone. Now we are focused on building a movement to reforest America, from cities to large, rural landscapes. We all rely on forests in order to survive and thrive, given the power they have to filter our air and water, provide jobs, mitigate climate change and more. But our forests are being degraded and destroyed at a rapid pace and large scale. If we take care of our forests, they will take care of us. American Forests is working with a diverse group of partners to achieve the following goals by 2030: At least 4 billion trees are planted across 16 million acres of North America, using climate-smart practices to determine what trees to plant, where to plant them and how to manage them; in 100 of America's cities, every under-resourced neighborhood reaches a passing Tree Equity Score—an indicator that the neighborhood has enough trees in the right places so all people benefit from trees; and at least 100,000 people, particularly those from marginalized communities, have entered jobs in forestry.

About Chubb
Chubb is the world's largest publicly traded property and casualty insurance company. With operations in 54 countries and territories, Chubb provides commercial and personal property and casualty insurance, personal accident and supplemental health insurance, reinsurance and life insurance to a diverse group of clients. As an underwriting company, we assess, assume and manage risk with insight and discipline. We service and pay our claims fairly and promptly. The company is also defined by its extensive product and service offerings, broad distribution capabilities, exceptional financial strength and local operations globally. Parent company Chubb Limited is listed on the New York Stock Exchange (NYSE: CB) and is a component of the S&P 500 index. Chubb maintains executive offices in Zurich, New York, London, Paris and other locations, and employs more than 30,000 people worldwide. Additional information can be found at: chubb.com.