NEW YORK, June 11, 2019 /PRNewswire/ -- Chubb today released a new report on the rising volume of securities class action lawsuits, which have more than doubled in the last four years.  The report, From Nuisance to Menace: The Rising Tide of Securities Class Action Litigation, examines the origin, scope and cost of securities class actions, as well as pragmatic proposals for reform.  The report features proprietary Chubb claims analysis and perspectives from some of the top securities lawyers in the U.S. 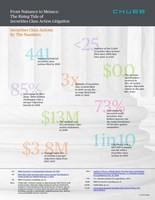 The data and insights in the Chubb report add to growing research about the costs to business and society from meritless securities class actions. In 2017 and 2018, the number of securities class actions filed in federal court broke new records each year, and the volume has doubled since 2014, according to NERA Economic Consulting. Last year, Cornerstone Research found that an average of one in 12 public companies was the target of a securities class action. Among S&P 500 companies, the likelihood was one in 10.

"There is a growing cohort of lawyers filing meritless lawsuits in federal and state courts across the United States every time a merger or acquisition is announced or a corporate misfortune impacts a company's share price," said John Keogh, Executive Vice Chairman and Chief Operating Officer of Chubb. "The financial rewards from these lawsuits are accruing not to harmed investors but to lawyers who are bringing cases of dubious merit in order to reap a windfall in legal fees and a disproportionate share of settlement dollars."

Chubb's data and insights on trends in securities class actions reflect its position as one of the leading global providers of financial lines insurance, which includes coverages for directors and officers who are targets of such litigation.

The report also discusses the broader costs of meritless securities class actions. "Rampant securities litigation is one of the reasons why the number of public companies in the U.S. is half of what it was two decades ago," Mr. Keogh observed. "Fewer public companies mean fewer investment opportunities for the average small investor -- and therefore less opportunity to participate in American growth and prosperity. Chubb is committed to sharing our data, insights and resources to raise awareness about this problem and to work on behalf of American business to effect meaningful reform."