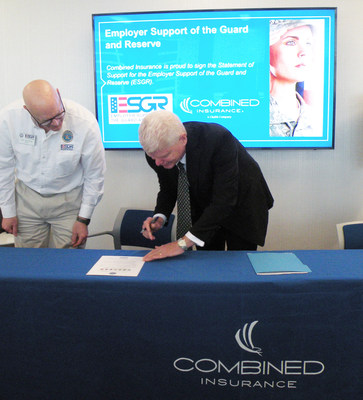 Statement of Support for Employer Support of the Guard and Reserve

Kevin Goulding, President, Combined Insurance, signs the Statement of Support for Employer Support of the Guard and Reserve alongside Bob Nachman, City of Chicago Area Chair for ESGR.

CHICAGO, May 14, 2018 /PRNewswire/ -- In demonstration of its continued commitment to supporting U.S. military servicemen and women, Combined Insurance participated in a Statement of Support for the Employer Support of the Guard and Reserve (ESGR) signing event, hosted at the company's headquarters.

A leading provider of individual and group supplemental accident & health, disability, and life insurance products, and a Chubb company, Combined Insurance is proud to continue this Statement of Support Program and commitment from president, Kevin Goulding, who joined the company last December.

In addition to the signing, Bob Wiedower, Vice President of Sales Development and Military Programs, received two awards from the ESGR—the Service Member Patriot Award and the Spouse Patriot Award, respectively— for his military service and support for our National Guard, Reserve, and military spouse employees.

Wiedower is a decorated veteran himself, having served 22 years in the United States Marine Corps, where he retired as a Squadron Commanding Officer.

"It's an honor for me to personally receive these two awards, and I am even more proud to continue Combined Insurance's support and partnership with the ESGR," Wiedower said. "Our company is committed to supporting our veteran community in many ways, whether it is through meaningful employment, volunteerism or corporate donations. Our ongoing support and partnership with the ESGR is one example of this, and one we are truly proud of."

Established in 1972, the ESGR is a Department of Defense program that aims to foster a culture in which all employers support and value the employment and military service of members of the National Guard and Reserve in the United States. The ESGR's Statement of Support Program's intent is to increase employer support by encouraging employers to act as advocates for employee participation in the military.