CHICAGO, March 1, 2018 /PRNewswire/ -- In demonstration of its continued commitment to supporting U.S. military servicemen and women, Combined Insurance recently donated a total of $50,000 to two military and veteran-related charitable organizations with check presentations at its Chicago headquarters. 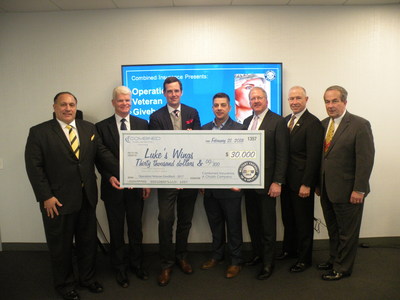 As a leading provider of individual and group supplemental accident & health, disability, and life insurance products, and a Chubb company, Combined Insurance continues the charitable legacy of its founder, W. Clement Stone, who aimed to "make the world a better place." In his lifetime, Stone donated more than $275 million to civic groups and charitable organizations.

Last week, Combined Insurance donated $30,000 to Washington, D.C.-based Luke's Wings and $20,000 to Chicago-based Heartland Alliance, respectively. The donations resulted from Combined Insurance's Operation Veteran GiveBack program – a two-week program in which the top two Zones with the highest in-field percentage during the last two weeks of the year (accumulatively) earn the honor of presenting a donation to a military or veteran-related charitable organization of their choice.

Combined Insurance's East Zone, which covers territory from Maine to Florida, finished in first place and selected Luke's Wings as their charitable recipient, while the company's Central Zone, which covers territory throughout the central and southern parts of the country, finished in second place and selected Heartland Alliance's Support Services for Veteran Families Program.

"It is an honor to support and recognize both of these incredible and inspiring organizations and help contribute to the services they provide the veteran and military communities," said Bob Wiedower, Vice President of Sales Development and Military Programs at Combined Insurance. "This is the fourth year of this program, and the sales agents in these zones worked very hard during those two weeks to ensure we have the privilege of giving back to our nation's heroes."

Luke's Wings is a national organization that provides free travel and travel planning services for families of wounded warriors and veterans so that they can be together during times of treatment and recovery. Combined Insurance has partnered with the organization for the past four years and received their "Community Impact Award" in 2017.

Heartland Alliance is more than 125 years old and is a leading anti-poverty organization to serve those who are homeless, living in poverty or seeking safety. They provide a comprehensive array of services in the areas of health, housing, jobs and justice. As it pertains to veterans, Heartland Alliance has a Support Services for Veteran Families Program, which supports low or very low income veteran families by providing housing stability. 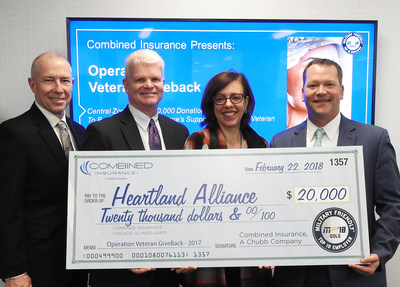