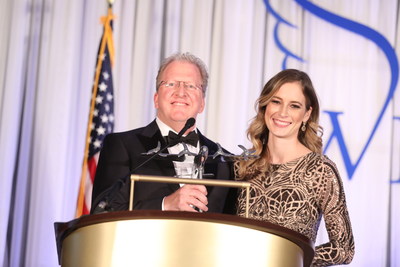 CHICAGO, April 13, 2017 /PRNewswire/ -- On Saturday April 8, Luke's Wings hosted their 6th Annual Heroes Gala to raise funds for service members who have been wounded in battle. During the program, Combined Insurance was honored with the 'Community Impact Award.' The award is presented annually to a foundation or company which emphasizes improving the military community by supporting nonprofits and their missions through extraordinary awareness and philanthropy efforts.

"We are honored to accept this award and proud to continue supporting an organization that does so much for our nation's service members," said Abercrombie. "For the past three years that we've partnered with Luke's Wings, we have seen their ability to connect military and veteran families together at the time they need it most. As a company that is committed to giving back, this is a true privilege for us."

Combined Insurance, a leading provider of individual supplemental accident, disability, health, and life insurance products, and a Chubb company, has been a key partner for Luke's Wings since 2015. The company has supported their mission through sizable donations as part of an internal sales program they call "Operation Veteran GiveBack."

"We are grateful to have companies like Combined Insurance by our side," said Fletcher Gill, Co-founder and CEO for Luke's Wings. "Our Heroes Gala further demonstrated the commitment of our partners, such as Combined Insurance, for coming together to honor and raise money for wounded service members and their families."

The 6th Annual Heroes Gala raised more than $320,000 to support Luke's Wings and their mission.